Lots of new roofs going on lately. We put a new roof on our little duplex rental and it seems to be holding up under the weather. The roofers are busy. It took our contractor six months to get a roofer to do the job. Gary is still picking up trimmings and roofing nails. The contractor working on the house north of us put a wrap over half the roof because it was dripping inside the house and then had to come out and put on a larger wrap. In the end, he roofed it himself, though in my experience general contractors don’t like roofing themselves.

In the mean time, the barometer has been dropping, we are experiencing 10′ tides, and neither Gary nor I has found a piece of sea glass for a few days [found green later in the day]. That last is unusual with high tides washing into the rocks. But there is no telling. Lots of bits of pumice have been kicked loose

People staying in the rental since the roof was repaired have been out in the ocean. A reminder: it’s November. Barefoot, swimwear, and playing in the surf during outgoing tides. Sometimes it was all I could manage not to go out and tell them to get their kids out of the water. In forty years, we have known too many drownings.

We expect to see snow in the coast range today. We expect to get in a walk because high tide is late in the morning. Yesterday we went out after dawn and after the tide had been coming in for a while and had to walk home on the road because the waves were washing up into the rocks by the time we got to our turn around. We got a little bit wet too.

A huge drift log, a couple feet across and thirty feet long, rolled and floated up and down in the tide. That log lived in the hedge next door for at least a decade [Gary says at least 2 decades], but yesterday afternoon it was lying in the sand directly in front of our house. We hope that 10-foot tides today and tomorrow will move it on.

I have finished my last holiday gift and picked up larger needles to make a hat for my grandson. The #6 needles felt so fat after knitting with #1s that I unraveled the hat and started over with #5s. I have a little dress to make too, and it’s supposed to be done the day after tomorrow. I am not optimistic.

NaNo is also a struggle just now. I have over 45k words, but the last few thousand are coming slow. How hard could it be to write those last five thousand words? At this point in previous years I had 70k, well over what I need for NaNo. And here I am struggling to get to the minimum. 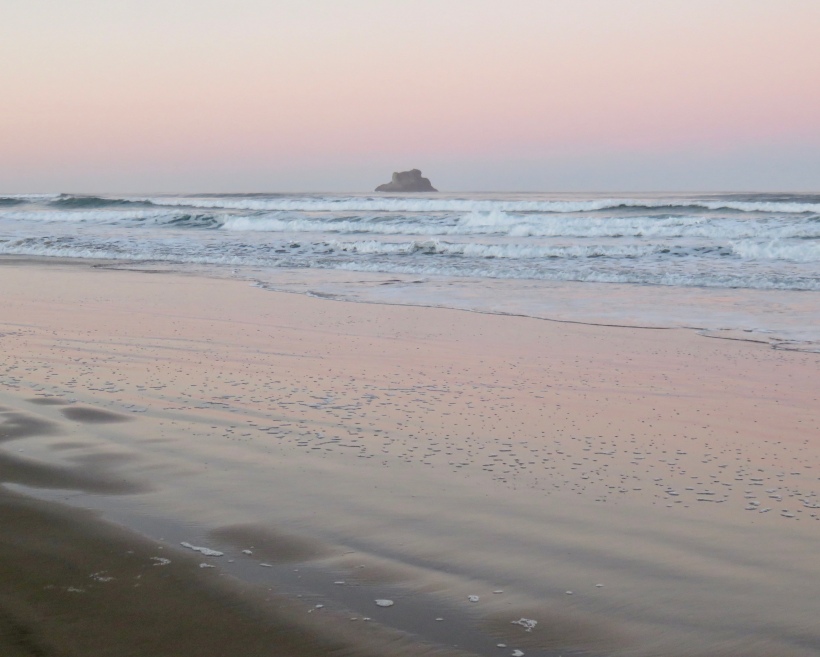 The good news is that I may have figured out how to develop the generational historical v. contemporary conflict I  had in mind at the start. Yeah, four days to go in NaNo and I might finally know what I’m doing? I have devised a plot twist (yes, plot! actual plot!) and have about a third of that written. I know about how it ends. I think I am writing Elizabeth Berg when I keep hoping to write something far more edgy, more like Emily Fridlund’s History of Wolves.

Well, there you are. Scratch this cynic and the optimist bleeds.

This is my new blog. My Blogger site had over 250k reads. I closed it, but here I am again.